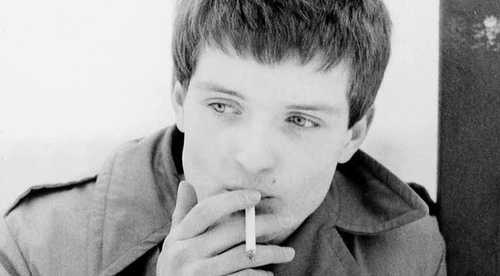 I have wandered into some really murky areas of the internet tonight, and it is frankly Steve’s fault. Having been stung into an exploration of the less reductionist areas of learning in response to his understated damnation of my beloved psychology and his implicit casting of me as a scientific rationalist dog! (pun intended). Check his excellent article, allotment (b)rambles.

So what has taken me to these shady online areas, what are they, and what other than Steve’s thought provoking piece has triggered this? The trigger was a documentary about one of my favourite bands, Joy Division. The BBC are currently showing a contemporary reflection by the remaining band members which left me thinking about just one phrase uttered by Bernard Sumners, their guitarist, and now New Order’s frontman/guitarist. I must have a very dark and nihilistic streak in me as I loved Joy Division to an obsessive degree, and still occasionally need a fix of their music. If you don’t know the band, the key point is that they are very dark and despairing lyrically. Musically, the sound is stripped bare and industrial with heavy echo and staccato, machine like drumming. After just two albums, their singer, Ian Curtis, suffering from probable bipolar disorder and recent onset epilepsy committed suicide. It was while discussing the band members’ response to this tragedy, that I was a bit shocked. Bernard Sumners was commenting on the fact that Curtis’s girlfriend Annik, had commented that she thought the signs of his growing depression were there in his dark lyrics leading up to his suicide; Sumners said that during rehearsals and the recording of the second album “closer”, “we didn’t really listen to the lyrics”! As someone who was moved and darkly fascinated by these lyrics, I was stunned to hear this. Stunned!

“The silence when doors open wide

Where people could pay to see inside

For entertainment they watch

Behind his eyes he says I still exist

This is the way, step inside”

These lyrics from a man suffering Grand Mal attacks with disturbing frequency just as an example!

This was probably perfectly normal behaviour from a group of young Mancunian post-punk musicians. They seemed to have patterns of behaviour around the rehearsals, the sound, the teasing of one another, the coping with producers and engineers changing their sound. These patterns occupied them, and in the middle of them they somehow failed to notice the signs of breakdown in their friend. It was certainly not callousness, but probably a lack of “Mindfulness” as they shared the experience. “We didn’t really listen to the lyrics”! I got the impression that these older, wiser men, 30 years on would notice more about the mental state of people around them.

I have failed to notice people around me entering a distressed or depressed state on a few occasions and so I wondered whether I am getting better at being aware of others around me or not. Can better habits be learned that will help us to give and receive more benefit in social groupings? This took me into a quick internet search on mindfulness and awareness of others. I can honestly say that I read the whole wikipedia article on the subject and was left little wiser.

What I did learn was that habit is an important aspect of mindfulness. The methods of improving your awareness of the here and now and the people around you seem to be as simple as taking regular time to stop, breathe and think “in an accepting way”? I also learned that reducing your focus on the future, and where you are going, as well as past events that you are struggling to let go of, is central to being thoughtful about what people are thinking or feeling now. Another thing to consider is liking yourself, or at least accepting yourself more. If you are neither resentful or jealous of others, then you can be aware of their needs and state in a less judgemental way.

As a convert to the usefulness of coaching skills, I believe that there must be real value in asking questions, caringly, and genuinely of friends and colleagues, that move you from your usual patterns of conversation. If you never find a way to talk differently, then you may never learn anything different.

I have become more aware of a desire to learn to be better at being with other people, but the internet has proved singularly unhelpful to my scientific rationalist mind. I intend to return to this, or hopefully we can enjoy articles from others who have better insights into this important learning challenge.

And any rays of light in the murky areas of the internet? This lovely wikihow article piqued my interest: