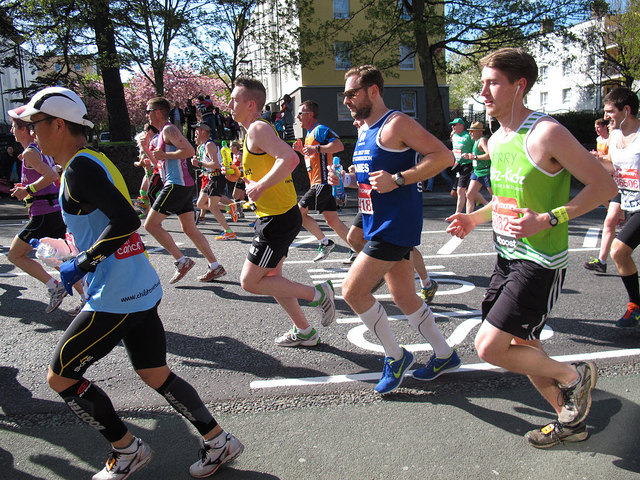 Learning sometimes seems to me to encompass everything we do; it is impossible to imagine any human activity, or even for that matter inactivity, that wouldn’t involve reflection, then experimentation to make things better? Last week I found myself reflecting on how much of this surprising-learning I was doing while I learn to run. I wasn’t actually thinking of it as learning, although I now feel that there is a large element of learning in what I’m doing. I started running to tackle my decreasing fitness and increasing waistline about 5 years ago. I really loved cycling as a favourite fitness activity, however, dark winter evenings simply don’t lend themselves to going cycling; pulling on a pair of running shoes and going for a 20 minute jog on the other hand I found I could manage pretty much anytime, so it stuck. However, that 20 minutes was critical for my approach. I actually disliked running and saw it as a means to an end, and really had no taste of the flow state that some runners enjoy when they lose themselves in the activity. My experience was, “argh, I really hate this, but no pain no gain kind of thing”. For about 4 of the last 5 years I never ran for more than 20 minutes. There was a brief exception to this, about 18 months ago, when I started to push those distances, from the 3km that 20 mins represented up to 40 or even 50 minutes, however this was short lived and was more to discover whether I was capable of it. I found it painful and unrewarding once the novelty of trying something new was over and I reverted to my 20 minute sporadic regime.

Last August, I really became aware I was losing my condition and was necking chocolate and muffins like they were going out of fashion. After an evening run, (you guessed, of 20 minutes), I came home, went online and knowing something had to change, signed on for the Great Scottish Run (10K race) in Glasgow in October. So I had 2 months to get ready to make a respectable fist of this run. The first problem was my weight, I am heavy, at that time around 112.5 kg. (Yes I think in Kilos, why people want to hang on to measurement systems based on the weight of grain sacks and the length of Kingly hooves is beyond me. Google tells me that that was 17.7 stones). So the cakes had to go and by and large they have stayed gone. I used to have a cappuccino every day at least, and that was never without a cookie or a muffin or some such. (Almond slice from Costa was a particular weakness). At the time I read an article in New Scientist which said that the jury was out on the different kind of fats that you could eat, but that there was no scientific dubiety on sugar; good natural sugars or refined sugars, no matter, your body doesn’t really need them and basically converts them to fat storage. I listened, replaced my morning sugary cereals with plain cornflakes, my beloved croissant and jam, with a slice of lightly buttered toast, and learned to enjoy cappuccino with no cake. It made a difference, by the October 10K I was about 107/108 kg and today I am around 104/105 kg. To put this in perspective I am now carrying around 8 bags of sugar less weight, and have dropped a trouser size and a shirt collar size. I’m sure that red wine could be a fitness culprit too, but I love it too much to cut that out for the moment. In August or Early September, I ran my first 10k distance and clocked 1 hour 20 minutes. by the week before the big race, I finally whittled that down to 1 hour 10 minutes and set that as a realistic target for the race. The day came, and I enjoyed being a runner in company of others, and was swept along by the joy of running closed roads through my local city, and clocked 1 hour 4 minutes or so. I was astonished; I hadn’t predicted that despite my knowledge of my own training data. I got a kick from the event and even had flow moments!

I had but one target mind after that, and it was to run 10k in under an hour. This is not fast by top runner standards, but it meant something to this lumbering hulk, 59.59 would do. I kept up my training of more or less two 5k runs, and a longer 10k or more at weekends, leading up to my second event in November. My training runs never got me any faster than about 1 hour 6 minutes from memory, so I went into the race a bit frustrated. I really tried hard, and was a bit ill for the rest of the day afterwards as I had stretched myself so much, however, no official time; the timing equipment failed. Unofficially my phone app put me just inside 1 hour 1 minute, but I can’t be sure. I am sure that I couldn’t have gone faster and that I felt that I might have just hit my own limits. Winter training got hard and motivation dipped when whole weeks were lost without training runs. I had signed up for a January 10k, but a combination of snow and a real dip in training led to me not attending. Motivation was a bit low. No races were booked and I was just running the same 10k times in training runs. My Colleague and friend Andrew, suggested that my approach was wrong; he questioned my long slow runs, claiming that they were getting my body used to running slowly? He suggested that I start by running faster 5k’s and then start stretching that to faster 6k and 7k runs. Up till then I couldn’t break 30 minutes for 5k. (If you can’t do that then how can you possibly expect to do two of them in a row?) Breakthroughs started. I was doing fewer long runs, but more 5ks. Over the last month, I have managed to break 30 minute 5k’s five or six times, even managing a  28 mins 30 recently! Frustratingly however, I ran two 10k’s in training realising that a month had gone by with no 10 k’s at all. Were these the breakthrough? No, 1 hour 4 mins or so, nowhere near the hour breaking pace that my new 5k performances hinted at. About 3 weeks ago, I realised that I needed to sign up for a target race. As it happened I was tempted by a series of 4 races, the first of which was in Helensburgh last Thursday. I was really uptight beforehand and really wanted an improvement, but I was confronted by the “facts”, I had no training evidence that I could sustain the pace I needed, indeed only contrary evidence. The evening came, and something amazing happened, I planned my pace, and my phone app, which gives me 2 minute average pace feedback, told me I was overcooking it. I slowed down and dropped back from the group I was in, even though every instinct said it was like defeat at 2 km. It worked though, I was able to sustain the pace, (just 8 seconds per kilometer better than hour pace), and then lift it again as my confidence lifted in the second half. My time, 57:52….somehow I had blown through my target.

So back to the learning. I had previously thought of running as simple exercise, nothing more. I now realise that I have shifted to a learning mode:

I really have been surprised by this conscious shift from exercising, to realising that I am an active and involved learner. Like all learning, it is interesting, and a reminder that learning really is the defining characteristic of being a human.

Thanks for the image by Steven Craven under Creative Commons. Thank you.