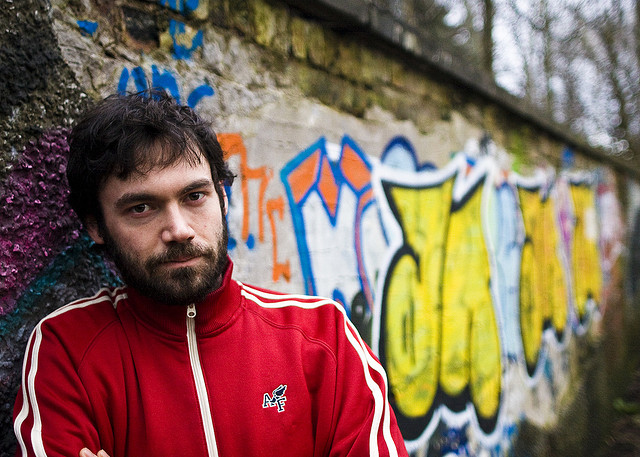 One of the most inspirational things I have ever experienced was revealed to me in the pages of “Amateur Photographer” magazine. A short news paragraph announced that New York Photographer Bill Wadman was undertaking a 365 days-in-a-year portrait project. I was mildly interested and so looked into and bookmarked his blog roundabout February. In no time I was a total addict and checking that day’s portrait became a drug-like obsession for me as the year of 2007 progressed. I consider the work Bill produced in that project some of the finest, most vibrant and energetic natural portraiture that it has ever been my pleasure to view.

I had a dabble with my own portrait project too, directly inspired by Bill’s project. Unlike Bill, I was not an accomplished photographer, but a new and learning one. Also unlike Bill at that time, I had a full time career very much not in photography! I decided to try a barely manageable twist on a portrait project; I decided to undertake 100 portraits in a year. The twist for my project was that my subjects would be in a self-selecting chain with only the first subject approached by and known to me. Each subject selected and arranged the next person for me! This was a challenge with my job as each person had to be photographed within three and a half days. My job had me driving all over Argyll and Bute and the associated islands, so this was often about a mad two or three hour dash back to the Glasgow area where most of my subjects seemed to be from. Winter, with light gone by the time my work was over was enormously frustrating. I started with very basic skills and I think I ended , via some terrible errors and misjudgements, as a decent portraitist. One of the proudest moments of my life was looking at well known photoblogger Gary Ayton’s pages about portraiture and seeing his example links of good natural portraiture as the PhotoGod, Bill Wadman, my favourite wedding photographer, Jessica Claire, and yours truly; I-nearly-died-of-chuffedness! (That is one of the few men who could depend on my kidney even though I have never met him). The sheer challenge of having to produce a genuine natural image that reflected the lovely people I met, every few days, when they had chosen the venue and the time of meeting. The vagaries of the light and the weather forced me, after the first few, to learn about light control in the field. Some basic equipment was purchased and rejected then re-bought and eventually I got some learning under my belt.

If you asked me about my personal projects I would probably tell you about my 100-portraits project. On reflection though, as an amateur folk musician at one time I recorded 3 different “albums” of music at home using first a cassette “portastudio”, then later a computerised recording setup. This is probably 15 to 25 years ago, and some of the self penned songs, (and a few of the covers), literally make me cringe now; the truth is however that the best of my basic musical talent was captured by my three fun projects, “live from the spare room”, “Variorum”, and “Second Sight”. (Some if it has been deleted from memory and the internet as an act of kindness to humanity).

Professionally, I once set myself the challenge of pulling together a set of materials to support the metacognition of the young people I taught. This grew from a conversation with the most wonderful man in educational academia, John MacBeath. John was working with the school I taught in as a “critical friend” as part of a research project on school improvement. I asked him privately one day, “what should I be reading to give me more insight into what I should do to help young people learn more effectively”? I had always been interested in this, and had read Tony Buzan’s BBC “Use your head” book as a teenager (by happy accident), so was primed to be interested, but was simply undirected. Professor MacBeath did not disappoint and before I knew it I was munching through a combination of his loaned tomes and reading list. The result of this was a book of Overhead Projector (OHP) acetates, teacher notes and learner materials that got me local note (and notoriety), a fellowship at Strathclyde University, and three enjoyable trips to Australia, oh and countless to England; above all it was the reason I met the loveliest man in education, the then steward of Tim Brighouse’s brainchild, the University of the First Age, Steve Rogers!

Edward de Bono has an extensive, (and controversial), literature on the subject of creativity. Many people comment that creativity is more about hard work than inspiration, and I would largely endorse that view. De Bono however added the essential idea of provocation, (pompously summarised as po) to the mix. His idea is that we tend to think in pre-programmed ways, with the obvious solutions coming to mind because our experiences programme us to know the obvious answers. Provocations are deliberate “jars” to the status-quo of our minds. For example, the designers of suspension for a well known brand of Scandinavian car were asked to design suspension for a car with square wheels. The point was not to really do so, but to “provoke” the designers to stop thinking about what they already know how to do; the result was hydraulic self-levelling suspension as used in many well known Citroen cars.

A project, (you won’t be surprised to hear), is a form of provocation. You know what you know, you know the solutions you have? If you set yourself a project with some interesting constraints, that you don’t know how to solve, then you will have to develop new solutions; this is a great way to learn.

I suppose what I have been trying to say if it isn’t already obvious, is that you should find and embrace projects to grow your own creativity. Put constraints on them, make them difficult and challenging as well as interesting. Tell a lot of people about them, so that you put yourself under pressure to deliver the goods. Knowing the answers is unlikely and irrelevant, but having the will to wrestle and react to the challenge will more often than not make you learn and produce some good work. Steve’s current series on digesting the great philosophers for the uninitiated like myself, might be a great example of a project with enough creative challenge and provocation to grow something wonderful?

Set yourself a challenge now. It might be scary, it might put you out of your comfort zone? Would that be a bad thing?

Just for a change, photo by Matthew, of “Tommy” from his 100-portraits learning project.