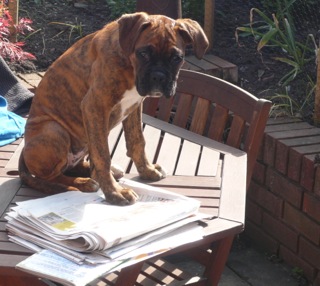 Posted by Stephen: one of the things we wished to achieve on this blog was to be a little more eclectic in our subject matter when talking about learning. Although, we’re not sure what this means or how to achieve it, Matthew and I did reflect in our last podcast on whether there was a greater focus on school policy, leadership and formal education than perhaps we had intended. So this got me ruminating about our learning and why we felt it important enough to commit time and effort to writing a blog and then be podcasting about it.

Let’s not forget that there is a sheer simple joy of ‘learning’, the eureka moment when the old dog jumps out of the bath for no reason than just being plain excited.  But underneath that, what is it that we try to understand about learning?

One of our key challenges, and I suppose the one that stimulates my writing at least (and probably Matthew’s if I may speak for him) is that learning and doing ‘something’, either with ‘stuff’ or a ‘skill’, is such a complex human process that initially we are not sure how to approach it. Both of us are curious by inclination, or disposition, or nature – it doesn’t matter which- and both of us feel that if we’re not learning, then we’re stagnating; so we are driven to write in order to think and understand more.   What does it mean to be ‘eclectic’ when writing about learning? For example, is it about understanding the personal motivations, emotions, dispositions, habits, cognitive styles and that underpin learning? Or is it knowing more about the processes of memory, cognition and pedagogy? (These last two questions we could say are about the meta-theories of learning).

Or, is it just about knowing more ‘stuff’ and being curious about what other people consider to be interesting to them? If so, are there marked differences between knowing, doing and understanding ‘stuff’ (a long running debate)? And how do we know if the knowledge gained is reliable or trustworthy, never mind ‘true’? But then I can only raise this kind of (epistemological) question in certain cultural and social contexts that admit to the possibility of scepticism– so is it the history and culture of ‘learning’ that we respond to? For instance, what is the role of the contemporary state in directing learning? How does ideology and discourse play out in learning practices? How is ‘learning’ further differentiated by social factors resulting from intersections of class, race, gender, sexuality and so forth? How are formal education and the best pedagogy to be influenced for the better from without those institutions? What is the culture of informal learning in any given society?

Oh, and by the way let’s not forget those poor whipped, phrases that are often sent to the kennels: joy, creativity, excitement. But formal educational institutions and educational policy, for understandable reasons, tend to end up wagging the old learning dog – the creature itself that should be doing the bouncing around, wagging the learning tail and licking anyone it can get hold of

So there we have the complexity of writing a blog about our interest in ‘learning’. Our eclecticism will hopefully take in something from all of those questions above.

However, my motivation to write on this blog, at heart, is prompted by the challenge of answering the question: ‘to what end or goods are we advocating learning and innovation’? These kind of questions then raise ethical and political challenges that both structure, and are structured by, humans seeking meaning and being a story-telling animal (and not everyone will accept that proposition).

In liberal democracies one is very cautious about specifying exactly what ends and goods people should pursue for themselves, providing they do no harm to others. (This principle, the liberty principle, is enshrined in the traditions exemplified by John Stuart Mill, 1806-1873, and John Rawls, 1921-2002).

However, there seems to be two paradoxes at work here in the confusion between learning as rich, challenging, meaning making, and the organisation of contemporary, formal, education.

Paradox 1) In a purportedly liberal society we ought to be comfortable with the idea of people learning whatever because it makes them happy, because it increases their chances of flourishing both economically and, for want of a better word, spiritually. Ironic then that higher education departments have to increasingly justify their social impact and economic use value in order to survive, and that our schools ‘educate’ young people to fulfill stratified economic functions in the guise of ‘opening minds’ to untold possibilities. We should not gainsay the need to be able to participate in the economic structures of society, at the moment it is difficult to look beyond some form of regulated, more equal and democratic capitalism as a means of organising a fairer society. However, what if we were able to give people the qualifications needed to passport them into work, but also valued other aspects of human learning and built more formal opportunities around such thinking? See for instance Matthew’s latest blog on the importance of failure.

In this paradox a key question for Each and Every Dog is to ask how do we shift education towards richer concepts of learning and human meaning making?

Paradox 2) Contemporary human societies, particularly those where forms of utilitarianism inform the moral criteria of the goods of that society, like to believe that educated, schooled, people increase the stock of human knowledge. The belief then follows that humanity is ‘progressing’ as knowledge will be used to make citizens better off and more enlightened towards one another. Knowledge gleaned through the very human processes of learning is surely an emancipatory act, helping us evolve many more freedoms in all sorts of domains? There are certainly commentators who cleave to views such as these. For instance evolutionary biologist Stephen Pinker believes that human violence towards one another is, taken historically, decreasing. Ray Kurzweil, he of the singularity fame, argues that human mark 2 is on the way: our technology will become part of us, or us part of it. Nano technology will be able to operate at a cellular level to keep repairing our bodies, and the exponentially increasing power of our information processing technology will be merged with the human brain.

Suppose though that these views are just an illusion? That Pinker is statistically wrong, that as in the Genesis myth, opening the way to increasing our stock of knowledge is simultaneously emancipating but also linked to human barbarity and evil. Something the ancients knew only too well and tried to find ways to live with. For a really cogent version of this counter-progress argument, read John Gray’s work (retired Professor of European Thought at London School of Economics) who believes that humanity’s capacity for barbarity and destruction remains undiminished, and is if anything increasing.

Under this paradox a key question for Each and Every Dog is to ask how do we imbue learning with an ethical purpose that supports tendencies toward peace and justice in our societies and environmental sanity for the planet, while still retaining fundamental liberties for fellow citizens?

While trying not to sound too pompous, in a series of posts I am going to argue that we need to think philosophically and ethically about ‘learning’, while acknowledging that this thinking also requires input from other disciplines such as the domains of cognitive science, psychology, sociology, and history.

Philosophical ideas can resonate through historically long-lasting traditions, but they are also always socially and historically located within particular contexts. So one of my motivations for ‘eclecticism’ on this blog is to try and understand, and if useful, try to revisit the power of these traditions using the best of contemporary thinking and by so doing, reflect on the human learning process both within, but most importantly, well beyond the walls of ‘educational’ institutions.  I do so ultimately in order to argue for better social policy making and a more well-ordered society.